Jason McCormick’s ‘malls for all’ mantra pays off

This developer of township and rural malls has just listed on the JSE, and dismisses market talk that SA’s retail landscape is oversaturated

This developer of township and rural malls has just listed on the JSE, and dismisses market talk that SA’s retail landscape is oversaturated

It has been an eventful few weeks for Jason McCormick, the CEO of Exemplar REITail, the first sizeable property company to make its debut on the JSE in 18 months. The listing of the Pretoria-based family’s R5.5bn shopping centre portfolio last week followed shortly after the birth of McCormick’s second child. It also coincided with a trip to Laikipia in Kenya where McCormick, an avid conservationist, is playing in the Last Male Standing Rhino Cup — a cricket tournament to raise awareness of the plight of the near-extinct northern white rhino.

Wearing multiple hats is nothing unusual for McCormick, who also sits on the sub-Saharan Africa advisory board of the International Council of Shopping Centres.
He is a licensed pilot, and keen photographer and fly fisherman.
McCormick joined the family business, McCormick Property Development, in 2002 after completing a BCom (Hons) in economics and management at Stellenbosch University.

The company, which was founded by his father John in 1983, was a pioneer in bringing formal retail facilities to townships and rural areas. John built his first retail property in Mogwadi (then known as Dendron), a small village 62km northwest of Polokwane. “In those days most developers were building shiny malls in the big cities. But my dad wanted to make a difference in people’s lives. He knew he could put money back in the pockets of local communities if they didn’t have to travel 60km just to buy groceries,” says McCormick.

Exemplar’s JSE listing wasn’t accompanied by an initial public offering. However, the company has a R10bn development pipeline of 26 shopping centres that it hopes to roll out over the next five years. “So we will definitely do a capital raise at some point to help fund new projects,” McCormick says. He concedes that the rural and township retail sector has become increasingly competitive, with a number of developers entering this space in recent years. However, he believes Exemplar’s competitive advantage is its track record.

“We also own the best-located sites for future developments,” says McCormick, who started to “landbank” undeveloped erven in 2008 when he realised other retail developers were starting to muscle in on Exemplar’s territory. ”That’s why we now have such a strong pipeline of new opportunities.” These include the 60,000m² Capital Mall that will soon break ground on the western outskirts of Pretoria as well as a 43,000m² mall earmarked for Tembisa on the East Rand.

McCormick says there is also an opportunity to acquire underperforming, existing centres where Exemplar can add value through redevelopment and re-tenanting initiatives. He dismisses market talk that SA’s retail landscape is saturated. While upper-income urban areas may well be overshopped, McCormick says it will take at least another five years before rural and peri-urban areas are adequately serviced. “But it’s not a cookie-cutter model. You have to understand the market and build the right size on the right site.” 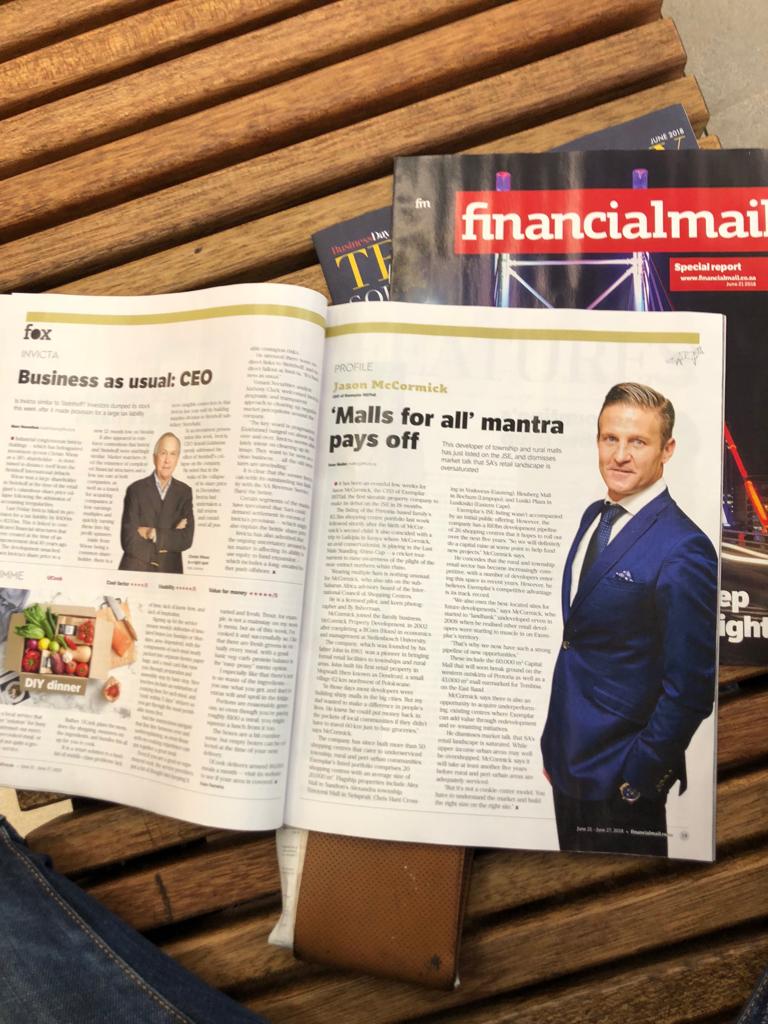 quick links to other articles

20 000 #MasksforGood delivered to the Alex community

Lessons Learnt in the wake of Covid-19

REIM – Getting to Know Jason McCormick